Designer Heather Collins has always LOVED space!  At one time she wanted to be an astronaut. The problem was that math and science weren’t really my strong suits when it came to school.  But I had a wild imagination and a mad LOVE of ALL things SCI-FI. As a child my whole family would watch whatever space theme tv shows we could find on tv.   My Dad and I would even sneak away and watch the movies. So when Kindred Stamps came out with ‘The Next Space Explorer’ stamp set I was thrilled. Though my daughter did try to steal the set when she saw it too.  I have continued the tradition of watching SCI-FI with my family too.

To begin, I placed the stamps in my Misti and, using Brutus Monroe’s Raven Detail ink, I   stamped out all of the characters. Then, using my zig markers and a water brush, I colored in each of the characters.   I used Nuvo Glitter, Clear and Red accents where I felt they were needed. The Glitter and Clear will lift any color that it is placed on top of. For the ‘Body Guard’ character on top of the clear Nuvo I sprinkled crushed silver glass glitter.  I fussy cut out each of the characters so they could stand on their own feet. 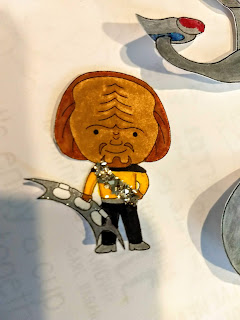 For the ship, I printed it out and colored the same with the the zigs, water brush and added a silver metallic marker.  I added the Nuvo Glitter and Red accents too where I felt there would be a light effect. 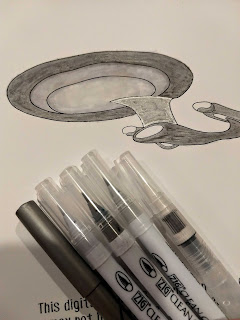 The canvas and half a sphere I coated with white gesso and sprinkled with ultra fine glitter.   I made some patterns on the sphere. On the canvas I sprayed Brutus Monroe’s ‘Cornflower, Oz, Suede. Sidewalk and Phonebook’ Surface Sprays.  Again I coated with the ultra fine glitter. Spray with water and make sure that the sides are covered also. I used a heat gun to speed up the drying process. I splattered with gloss white enamel paint when it was dry.   Lastly, I added crystal gems on the canvas. 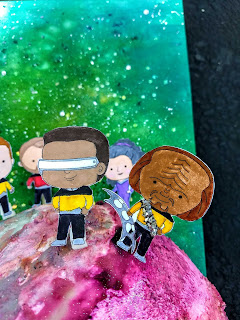 Taking the half styrofoam sphere I applied Prima Marketing Art Extravagance -Stone Effect Paste (Pumice, Limestone, Concrete).    The first thing you want to do is open them all up and line them up in order of thickness. I applied the concrete first then surrounded on both sides with limestone and lastly pumice.  I wanted the planet to look like it had a crater on top and then a wavy pattern in the middle circling the whole thing. I brushed on some leftovers on the bottom and a gap so that it didn’t look like it was too smooth.  After it was dry, I sprayed Brutus Monroe ‘Sidewalk’ Surface Spray on top. Then took Brutus Monroe Color Burst and sprites on the globe and sprayed with water. To get the darker look I mixed some ‘Marsala’ and ‘Jack O Lantern’ in a little container and applied with a foam brush. 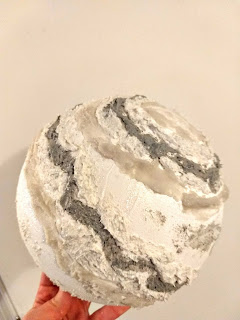 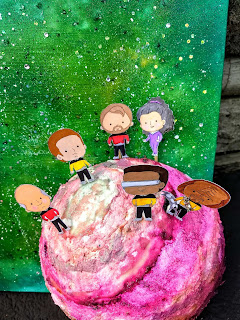 After everything was dried the assembly started.  The ship was mounted on a straw on a wire frame and attached to the back of the canvas with tape.  The sphere has a double layer of foam squares on the back and is attached at an angle onto the canvas.   Two of the characters I put on wooden kitchen skewers so they can be moved. The other characters were mounted on foam squares and just attached to the planet. 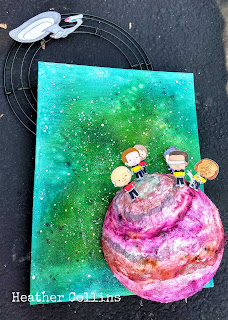 We are extremely excited about this month's Kindred Stamps release, and want to invite you to join us on our Facebook event so you can see all of the projects our Creative and Design Teams made to showcase these fun sets! If you take the time to hop along with our team, make sure you leave a comment on each blog to be entered to win a $10 store credit!
Kindred Stamps
Mad Crafter's Tea Party
The Frolicking Fairy
Wunders Crafty World
DaggDesigns Blog
Amy Hurley Purdie
R. Winn Creates
Heather Collins - Guest Designer (You Are Here!)
Fanciful Spaces
Crafting Love
You can also join our Fan Club on Facebook to show off your own projects an see more from our teams throughout the month! We will announce our blog hop winner there, sometime on Saturday the 26th! (In addition to messaging them privately.)

Hello there!  I was given "Slay" to work with this month, an incredible honor as I am a big fan of "Slayverse".   The ... 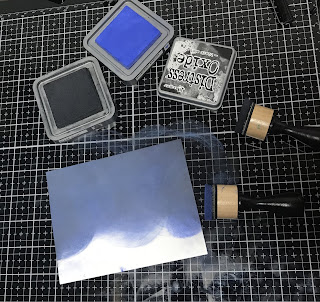 Welcome to the blog for Kindred Stamps Guest Designers!